This post has been a long time coming. It's time, at last, to dip into the forgotten origins of salsa outside of the United States.

Some of you may remember my comments about the origins of salsa in my El Cantante review, what one commenter called a "non-centrist" view of salsa. It is indeed a fact that salsa was not just a Nu-York creation. In the late 60s, many Latin American communities were collaborating in a world-wide vision of salsa that, despite being just as fresh and innovative as Nuyorican salsa, would be hidden behind the Fania logo. This is not to say that Nuyorican salsa was inadequate, or subpar (after all, I did a massive upload of the Hector Lavoe & Willie Colon discography); I'm simply pointing out that the American account of salsa is a biased one. In the process, we, the fans of Latin music, have missed out on some incredible music. Today's post is a small attempt to change that.

Enter Venezuela, circa 1966. For years, radio waves from as far away as Spain, Mexico, and Puerto Rico have been criss-crossing the streets of Caracas, planting rebellious seeds of Latin music into the minds of its youth. Among them: Federico Betancourt, Olinto Medina, Oscar Simoza, and Ramon Rivas. You might know them better by the names of their bands: Federico y su Combo Latino, Sexteto Juventud, Oscar D'Leon, and today's featured artist, pianist Ray Perez.

These are just some of the creative minds who would establish a flourishing salsa scene that was just as hard-hitting and unprecedented as anything that the streets of New York were putting out. Influenced by the aguinaldos of Venezuela, the seis of Puerto Rico, and the music of Mon Rivera, Ray Perez would begin his salsa career (though it was not called salsa then) in 1965 with Ray Perez y su Charanga, an early incarnation of the band featured today, Los Dementes (the crazy men). Ray, nicknamed "El Loco" (the crazy man), originally wanted to titl 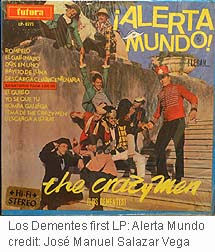 e the band Los Dementes, but such a name would have sparked a riot in those days. Rather than let his band name set people off, he did it with his music. With a peerless melding of folk traditions and new experimentation, Perez began writing some of Venezuela's most furious music, an incendiary brand of salsa with heavy trombones as its centerpiece. The first Los Dementes album was released in 1966 (Ray Perez claims the year as 1966; other accounts claim the year as 1967).

By now, you might be noticing the glaring similarities between Ray Perez and Willie Colon's respective forgings of salsa. Both were influenced by Mon Rivera; both were raised on the folk forms of their culture; both would incorporate this into their music while attempting a new, groundbreaking sound; both were recognized in rebellious ways (Colon had a reputation for being a tough kid, presumably informing his gangster marketing image for Fania; Ray Perez was dubbed El Loco for coming up with new things); both created a music that was culled from their streets (as Ray Perez put it, the barrios of Caracas are "like Brooklyn, or the Bronx."); and both released their first albums at about the same time. This is not to say that Perez and Colon are similar people, or that Nuyorican salsa and Venezuelan salsa are the same--the two movements are distinct and have their own legacy, and I cannot even pretend to know the nuances of each. But they share a trope that is central to much of the music that history remembers best: they dared to try something truly new.

And yet, history hasn't recognized Ray's accomplishments as well as they have Colon's. Los Dementes would become a tour de force in Venezuela and abroad, earning Ray fame in Mexico and even Italy. A driven artist, he would also form myriad bands such as Los Calvos and Los Kenya. At clubs around Venezuela, he would share the honor of alternating the stage with greats such as Eddie Palmieri, Joe Cuba, Pete Rodriguez, and Ray Barretto. Barretto once joked to Perez, then called Ramon, that the era of the kings was coming to an end (the Spanish word for king is rey, which is pronounced the same as "Ray"). It would be fitting, then, when in a seemingly inevitable move, Perez relocated to New York in 1969 and was dubbed Ray himself.

In New York, he would play with Kako, Chivirico Davila, Cortijo, and Ismael Rivera. As if to cement the similarities between Venezuela and New York's thriving salsa scenes, Los Dementes would later record for Fania.

El Tiempo Pasa, Pero Mi Salsa Llego, loosely translated as "Time passes, but my salsa is here now," is a fitting name for a retrospective of the work of Los Dementes, released only last year. It's a fortunate glimpse for those of us who don't have the $200 to shell out for a single Ray Perez-related LP (if we can even find one). Much like my personal favorite group Conjunto Canayon, you can distinctly hear folk music underpinning the Los Dementes sound, but the gritty trombones and frantic vocalizing of great singers such as Perucho and Teo Hernandez launch their music into an unmistakably modern timbre. Some of my favorites include the compilation opener, Vengo de Oriente; the truly CLASSIC La Llorona, with its haunting, reverberting plucks of cuatro (or is that violin?) and powerful performance by Teo; the fun, Vitin Aviles-esque El Perico; Justo Brito y Juan Tabare; and Cosas Que Pasan. But, as is the case with any well-put together compilation, picking favorites proves pointless. Grab it and see for yourself.

As a testament to his legacy, Ray Perez appeared in a club in Italy last week as part of a well-attended tribute to his music. Check out some footage of the event:

And while we're hitting up Ray Perez videos, here's a much later incarnation of Los Dementes in a hilarious TV performance that is aaaaaalllllll 80s.

Also, check out an excellent Descarga interview with the man himself.

And don't forget to check back soon, when I'll be uploading another gem from the early days of Venezuelan salsa.
Posted by Julian Drago at 6:08 PM 143 comments: