Ready for more salsa brava in the vein of Orquesta Guarare? Get your hair did for dancing, because this album is hot.

Much like the rather confusing Ray Barretto split that gave rise to Orquesta Guarare, Orquesta La Terrifica splintered off from Sonora Poncena in 1973, one of the most famous groups to ever come out of Puerto Rico. When I say that La Terrifica sounds like Guarare, there's good reason: La Terrifica's early albums featured vocalist Tito Gomez, who sang for Orquesta Guarare and Ray Barretto and just recently passed away. The members defected with leader and Sonora Poncena trumpeter Jose Rodriguez; other members included Mikey Ortiz (timbales), Francisco Alvarado (bongos), and Tito Valentin (arrangements). Later veterans of La Terrifica would include famous arranger Jorge Millet (piano), Hector "Pichie" Perez (vocals), Yolanda Rivera (vocals), Manuel "Mannix" Martinez (vocals), and Hector Tricoche (vocals). I haven't been able to confirm this, but according to this site, Hector Lavoe himself helped out on coro during live shows in 1974, alongside vocalists Yayo and Adalberto Santiago. 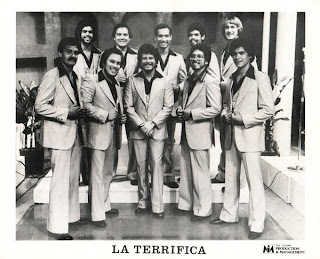 Despite never being as popular as Sonora Poncena, La Terrifica put out some of the best salsa of their era and, thankfully, their devoted fans haven't forgotten them. A number of Orquesta La Terrifica albums have been reissued over the past few years (most famously, their self-titled was re-released in 2002, sporting their biggest Jorge Millet hit, Pura). To my knowledge, Terrifica, their first album, has never been re-issued.

From the first taste of Jose Rodriguez's horn lines on Acere Trumbero, you know you're in salsa heaven. The penchant for hard-edged salsa on Terrifica overshadows their former (and slightly more complex) Sonora Poncena sound. Tito Gomez and his coro do an excellent job here on cuts such as Hachero Mayor and the gorgeous bolero No Te Vayas Juventud, a poignant lament that finds Gomez begging his personified youth to "stay just a little longer." And for all of you from Ponce, PR, prepare to reminisce about la famosa Guancha with the fourth cut. Other tracks like Comedia and Vicente Camaron keep it upbeat, and Biribo is an incredible closer and my favorite on the album.

Solid from start to end! Enjoy!

Note: Divshare has been experiencing random outages, so if the link below doesn't work, try again a little later.
Get it here
Posted by Julian Drago at 1:45 PM

Another rare pearl mate! I really love your taste in Latin Music, always a real pleasure to read and hear your stuff. 1000 thanks.

Hands Down, coming from the Bronx NY, THE BEST BLOG I HAVE EVER ENCOUNTERED! You are repin' the music and culture to the fullest! GOD BLESS YOU BRUTHA! PEACE!

What a trip down memory lane! I had the honor to play with La Terrifica from 1974-2002 and will always remember those good times.

Another hot one. Wish I had the whole album.

It was my privilege to play with La Terrifica from 1974-1982. Mannix and Pichie were close friends that taught me Spanish and culture while entertaining thousands.....great memories!