As promised, my personal favorite Latin music album. Ever. 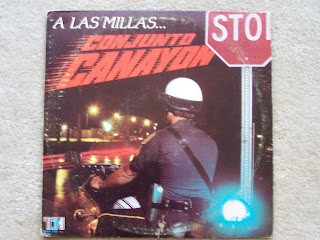 Yea, it's a lousy cover. You wanna fight about it? 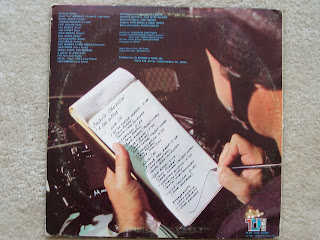 Click to see album details
Who is Conjunto Canayon? I wish that I could tell you. There's very little information about this band outside of their discography, which itself seems incomplete. What I can tell you is that Canayon (sometimes spelled as Canallon or Kanayon, making information even harder to come by) is a Puerto Rican band led by timbalero Cano Robles. They recorded in the early 80s, during a time when the wave of 70s salsa was diminishing and succumbing to the glossy, overproduced sounds of the decade. Consider a case-in-point. During this time Ruben Blades would record Escenas, featuring the song Sorpresas, the "sequel" to one of his greatest songs on one of the great Latin records of all time: Pedro Navaja, found on Blades's collaboration with Willie Colon, Siembra. While lyrically astute, the energy of the new Seis de Solar band wasn't there, perhaps muddled by the electronic drum kits and synthesizers. It was, in my humble and perhaps very biased opinion, salsa without its musical soul. The fact that such a important legacy in Latin music could not be aptly carried on, for me, perfectly summarizes the state that Latin music would find itself in by the mid-80s. (This is only my opinion....many disagree, and I encourage you to decide for yourself, as Escenas is still in print)

But if there's anything I've learned from my lifelong affair with music, it's that any generalization about a genre or time period in music always carries exceptions. I offer up one of those exceptions today.

A Las Millas, euphemistically translated as "going fast" or "at lightspeed," was recorded in 1981 and released on the Puerto Rican Top Hits label. To my knowledge, this is the band's first album. They would record Criollo y Mas in 1982, and another album, perhaps their most obscure, Folkloriko Tropical, was recorded at a date unknown to me. In 1998, a "best of" of their material, entitled Colecion Series Vol. 1, was issued on a record label created by the Conjunto Canayon members, simply entitled Kanayon Records. It has since become out of print. There may very well be more installments in the Canayon discography that I am not aware of.

It's truly astounding that Conjunto Canayon has gone virtually unheard. Their music fused salsa, cumbia, and descarga while retaining a truly original sound unlike any other artist I've heard. Furthermore, they were incredibly innovative, giving even the great Ray Barretto a run for his money by employing complex rhythms, stop-start structures, and perhaps most intriguing, a boldness in experimenting with dissonance in their melodies, an avenue of exploration that I cannot say even Barretto braved. Indeed, Conjunto Canayon, much like Ray Barretto, sounds like a band founded on Latin jazz playing Latin dance music. Though rare, a few songs such as Wild Tropical (found on A Las Millas) and Tropical Jungle (album unknown, as I've only heard it on the 1998 retrospective) find the band casting off lyrics and pop song structure for extended, flute-centered jams.

The first song on A Las Millas, No Se Puede Vencer, perfectly encapsulates my point. The sweeping piano intro recalls Eddie Palmieri in his more experimental years. Pay attention to the guitar as it comes in. It is slightly dissonant, a tactic virtually unheard of in Latin music. Immediately, you get the feeling that you are listening to something different, something truly unique. Vocalist Cheo Quinones captures this perfectly. He is in no way as refined or polished like the greats Tito Allen or Ruben Blades. Rather, there is something undeniably earthy in his timbre, much more down to earth. This is a vocalist that you would hear singing on the streets of Puerto Rico, accompanying las parrandas (small, roving, improptu bands formed to visit and sing to neighbors) through the barrios, as real as the Puerto Rican soil itself. The flutes move throughout, setting up a darker, minor mood to take the fall for an explosion into more upbeat territory as led by Quinones and his backing vocalists, Pipo Pica and Rafael Lopez.

Then, there's the next track, Chaflan, the hit song of the record. It is a perfect song, start to end, and a classic in the Puerto Rican canon (modern reggaeton artist Residente Calle 13 references the song's chorus in his self-titled album). Once again it begins with the signature Canayon build-up, a dissonant rumbling of the bass and congas, and an elegaic plea from the choro. Soon the polyrhythms come in over the groove, but this is only foreshadowing; if you thought the song was settling in at this point, you are wrong. Soon enough, the real groove comes in, an unforgettable chorus referencing the fugitive main character, Chaflan, as he runs "a las millas." Though it makes more grammatical sense in Spanish, the chorus (Nadie sabe donde viene, pero a las millas) is linguistically playful: no one knows where's he is going--but fast. It is catchy and furious, and features an excellent horn break once again showcasing a penchant for dissonance. The almost haunting, reverberating lyrics during the outro harken back to the production ideas emerging out of the Willie Colon camp in the 70s. This song is, to say the least, sublime.

If the rest of the album slows down, it's only because Chaflan can't be topped, and the songs compose an excellent album no matter what they follow. Rafael Lopez, as on Chaflan, sings Hace Tiempo; Pipo Pica takes over on the hit La Revelacion, a song about a man's epiphany concerning salvation through music. The song features an excellent vocal solo as it improvises with an accompanying guitar, ending in a heavy, bass-driven breakdown that virtually deconstructs the entire song. Cosas Del Amor is an upbeat dance number and ode to love, featuring an unforgettable chorus. Que Cosa's horn lines rank among their best; Nuestra Musica, a Johnny Ortiz cover, showcases fiery flute and percussion work as bookends to the song. The album closer, Wild Tropical, is a Latin jazz jam showcasing the band's musical foundations. Incredible flute abounds, courtesty of Coco Andujar.

I could go on and on about this album and how much I love it (and virtually already have). It is a true gem, one of those finds that is not only treasured for it's rarity, but because it's quality is unequaled. It's a great pleasure to share this with you guys, I can only hope you'll enjoy this band's music as much as I have.

IMPORTANT NOTE: This is an original vinyl rip, and, unfortunately, features a few skips (on Que Cosa and particularly on Cosas Del Amor). There is an another mp3 rip floating around on the internet (itself very difficult to find), though the quality is much worse and sounds like it has been heavily treated with noise removal, resulting in a tinny film over the recording. I've included my original, unedited rip, skips and all, but I've also included versions of Que Cosa and Cosas Del Amor in a separate download so that you can hear the song uninterrupted, despite the poor sound quality. I apologize folks, there's nothing I can do about the skips, and you may very well never see this album anywhere else.

The Full Album
Get it here
or here

Que Cosa & Cosas Del Amor (no skip versions, see above)
Get it here
or here
Posted by Julian Drago at 2:18 PM

Hmmmmm...this is a little pearl like many others you should share later on, I'm sure, sounds promising, can't wait! Thanks

Te felicito! congratulations! that you have a good taste,because Canayon ist one of the best Salsa bands that I ever heard in my life,unfortunatelly there are no much records from them,if you find more please let me know,Thank you!
Fernando.

I lost this album when I got out of the ARMY and moved back to Puerto Rico in 1983. I thought I had lost it for ever and also thought it was one of the best albums ever!!! I downloaded the one "floating" in the internet. I'm so glad I found this post. I downloaded your version and I have to admit, I am impressed. Thank you so MUCH for uploading your version. Many Blessing to you and yours!

thanks for posting this awesome album.
it`s an instant classic.
much love.

the song 'Trigueñita' was written in 1945 by puertorican composer Miguel A. Maymón, from Mayaguez. Originally written and recorded as a 'Ranchera' by El Trio Vegabajeño, (El Trio Nacional de PR), a recording of which can be heard at www.maymon.org
The owners of the copyright for the song 'Trigueñita' are surprised that Conjunto Canayon did not credit the composer in the record, instead they wrote "desconocido" under the song's title, which is just hogwash because the song is known since the 1950's in Puerto Rico. Conjunto Canayon arranged and recorded the song in Salsa style.