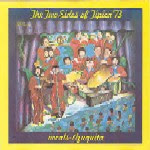 Tipica '73 is a loose collective of often rotating members formed during the Ray Barretto fallout in the 70s (detailed in my Orquesta Guarare post). Unlike Orquesta Guarare, Tipica '73 tended towards the more Ray Barretto side of experimentation and Latin jazz, thus making it difficult to to understand why the band members would want to split off in the first place. Orquesta Guarare, it seems, wanted to play straight dance music, making it easy to ascertain why they wanted out of Barretto's experimentalism. Tipica '73, on the other hand, continued to refine the nuances of jazz and Latin fusion with a host of new styles and rhythms. It was as if Barretto himself was split in half by a mighty Janusian blow: on one side, the friendlier but still excellent roots of dance music performed at their best; on the other, a desire for innovation, and moving forward within an already conservative style of music.

But if this schizophrenic fault line tore the Barretto legacy in two, then what is most interesting about today's album is the way in which it carries that duality. Indeed, the album title translates to The Two Sides of Tipica '73, and the LP, originally released on Fania's sister label Inca, was meant to showcase the very split that resulted in the Ray Barretto fallout in the first place; in other words, the continuum between tradition and innovation. Both tendencies exist side by side on this album, from the furious improvisations and stop-start dynamics of the orchestra on Bongo Fiesta, Salsa Suite, and It's A Gay World (my personal favorite), to the straightforward dances of La Botija de Abuelito or Tumba Tumbador. I would also like to point out the electric side of Tipica '73: the electric organ (of some sort?) on Salsa Suite, and the smokin' Yo Bailo De Todo, which features a hot Eddie-Benitez-meets-Santana guitar squaring off against violin and trading fours.

The music here is truly the best of the best, excelling in all respects, whether conservative or cutting-edge. Such quality is to be expected with a line-up boasting violinist Alfredo De La Fe, trumpetist Lionel Sanchez, conguero Jose Grijales, flutist Dick Meza, and the new additions of timbalero Nicky Marrero and ex-Cortijo vocalist Camilo Azuquita, who steps in to take the place of famous Barretto singer Tito Allen from previous Tipica '73 records. He fills in quite beautifully. 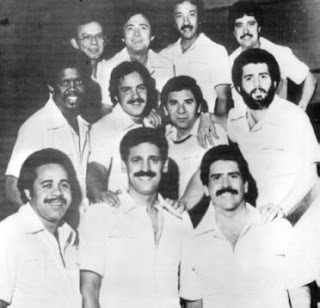 And feast your eyes on Tipica '73! This first video features the 1975 line-up, as headed up by Adalberto Santiago on vocals, performing Canuto from their album Candela.

Same line-up, performing El Jamaiquino, but with better sound. Check out the organ (?) at 1:45 in, and the sweet wah'd out classical guitar!

Want to know more about Tipica '73? An excellent article by Tommy Muriel covers them in much more detail here.
Posted by Julian Drago at 5:14 PM

hell yeah! thanks for the history lesson too. I feel like compared to other mid/late-70s musics (funk, reggae, afrobeat) salsa's history is not so well documented.

That's a cuatro, not a classical guitar.

hey fren! could you please re upload the file of the Tipica '73, is not working please!!!!!
if you could reupload the file in rapidshare i will love it. thanks.

Excellent album! I´d never thought Rimsky Korsakov sounded that good with salsa
Thanks for the upload

I had a copy of this album when I was a kid, I am now 46. I thought it was the most amazing thing. However, I had no idea, until about 8 years ago, that there was some cover music going on. It wasn't mentioned in the liner notes. Beny More's "Tumba Tumbador", and ritmo oriental's "Yo Bailo De Todo". It doesn't take away from my love for La Tipica, but I wish that as more and more note-for-note re-interpretations of Cuban tunes surface, that it's properly credited so that we can also enjoy the original versions.