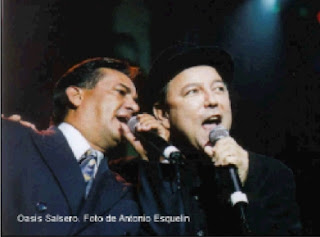 I'm quite late on getting this news, but it's tragic nonetheless. Sonero Tito Gomez (not to be confused with the Cuban singer of the same name), perhaps best known for his work with the early Sonora Poncena, unexpectedly died of a heart attack on June 12 at the far too young age of 59. A great friend of the legendary Ruben Blades (to the right of Tito in the adjacent picture), Gomez also worked with Charlie Palmieri and Ray Barretto, and would later go on to do more contemporary work with acts such as the Colombian Grupo Niche.