A very special post today guys. One of the most unique and recognizable voices in all of Latin music, Ismael Rivera is my personal favorite cantante, and this is one of my favorite albums featuring him. Curious as to why I consider Rivera the best? See for yourself.

What's odd, though, is that Lo Ultimo En La Avenida is Rivera out of his element. Almost all of Rivera's career is anchored by the support of good friend and percussionist Rafael Cortijo in a duo famously known as Ismael Rivera y Sus Cachimbos. This album, however, finds Rivera backed by another excellent conguero-led band: Kako y Su Orquesta. Though Rivera and Cortijo grew up in the barrios together and formed a timeless bond--both personally and musically--that would rock the world of Latin music, Rivera doesn't seem to skip a beat with Kako behind him, and neither does Kako himself. In fact, it's as if these two had just as much of a history together as the Cortijo and Rivera duo. The arrangements are tight here, as Rivera, in classic form, weaves his singing in and out and over the band's energy, teasing la clave as if he were born with it. This isn't to say that Rivera wasn't at home with Cortijo's band, but the incredible performance on this record really makes me wonder what we would have seen had Rivera and Kako worked more closely together.

Released in 1971 on the Fania label (and recently reissued along with a host of other Fania jams, so do them a favor and buy it if you like it! I've got mine!), Lo Ultimo En La Avenida hosts some of my favorite songs in Rivera's catalog, which itself reads like an extended greatest hits album. I already posted El Cumbanchero in an earlier post (link), and it's my favorite song on here. There are some other classic tunes as well, including the playful poetics of Mi Negrita Me Espera, making humorous comparisons between the color of the night and the skin color of his demanding wife. The ostentatious El Truquito showcases Rivera's sportive ego as well as penchant for skillful inflection, and for some excellent rhumba, check out Cantar Maravilloso. In truth, pretty much every song on here is a hit. From me to you, one of my favorite albums ever! 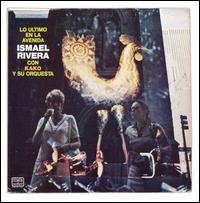 One final note. Before I say goodbye for the weekend, I'd like to hip you to another excellent Latin music blog run by Pepanito. Check it out here for a lot of quality Latin music. Pepanito has great taste and has been nothing but supportive of my entrance into the world of Latin music blogs, and I'd like all of you who aren't already privy to his blog to show him the same!
Posted by Julian Drago at 4:16 PM