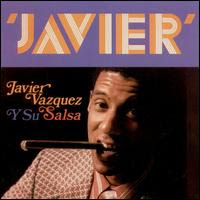 One of the lesser known Cubans swallowed up in the primarily Puerto Rican 70s New York salsa scene, I first discovered pianist Javier Vazquez through his appearance on Ismael Rivera's Maelo, where he rocks the piano and takes arrangement on a few key cuts. He's also worked with Johnny Pacheco, Frankie Vazquez, Daniel Santos, Rudy Calzado, and Cali Aleman, in addition to brief stints on the mighty Fania and Alegre labels.

Not as well known as some of his other albums (La Verdad), Javier is a smoking set with some unforgettable songs. Si Acaso starts off with a reverb guitar playing a lullaby, only to launch into a dance floor jam all about, paradoxically, getting to bed early to go to work. Tu No Me Has Visto Miguel is a regular on my Latin Show, and features some interesting electric guitar work, paving the way for Javier's brief work on electric piano later through the album, particularly on the ballad Companeros del Sabor. And Mi Ritmo Esta Bueno has an unmistakable Ismael Rivera vibe to it.

My first official upload. I hope you enjoy!

Thanks for your comments on my Tito's post...I'am glad your open your latin blog with this very nice release. Welcome and I can't wait to discover your stuff...

Hey, I think this is a wonderful idea for a blog, and it coincides nicely with my renewed obsession with Arsenio Rodriguez. Any chance you've got some Ralph Robles, Bobby Paunetto, or Larry Harlow in store for us?

Tu No Me Has Visto Miguel is a great cut, you're right. Thanks for sharing this one.

Thank You! I've become a big fan of Javier Vazquez!!!